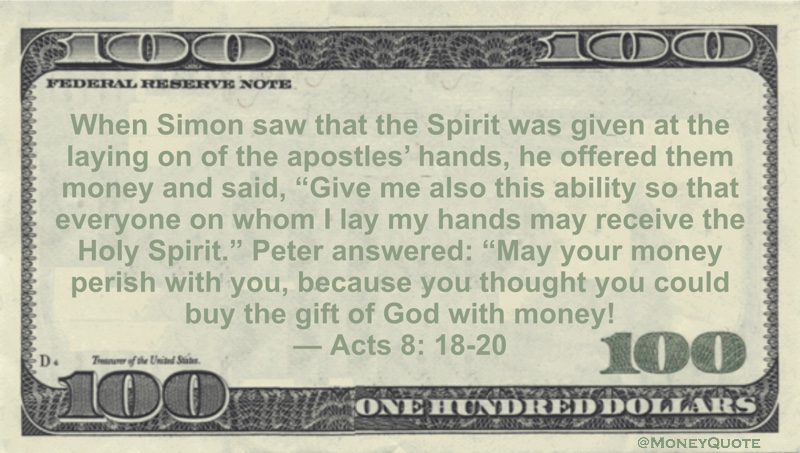 The Holy Spirit cannot be purchased-Acts 8:18-24

I am certain that we all have heard that there is nothing new under the sun. In this context of scripture, we find Simone wanting to purchase the Holy Spirit to pervert Him among the people. But I love how this was dealt with and it shows me that in today’s world as we who are filled with the Holy Spirit move about doing good among the people that there will be people who believe that if they can purchase what we have that they will be able to accomplish that which has been given to us freely by GOD in the name of JESUS as if what we do is some type of magic. It is not of GOD when people want what we have so that they can profit from it. But I want you to understand that the Holy Spirit is not someone that can be bought, He is not magical, He is not someone or something that operates with spirits (fallen angels/demons) or the science of production. The Holy Spirit is not counted among the departed spirits (fallen angels/demons) and nothing about Him has anything to do with enchantments or sorcery. The Holy Spirit does not operate according to superstitions and is nothing at all like or has anything to do with satan and his demons. Let us take a look back in history because Simon was not the first to live with GOD’s anointed and receive the overflow of blessings that had an impure heart due to greed.

Take a look at Gehazi, the servant of Elisha; Elisha under the direction of the Holy Spirit was used to clean Naaman of leprosy. Naaman wanted to pay Elisha but Elisha refused. As Naaman went his way Gehazi went after him after he made sure that Naaman had gone some distance so that what he had plotted in his heart would not be witnessed by Elisha. People who are religious and have unclean hearts will do what they have pondered over for a time believing that what they are either doing or saying is for or from GOD. Most often, when people believe that they are not as important as those that they know, they will use the name of those that they believe have more weight to accomplish that which through evil motives desire. Everything that will be said is a lie. And, because those who do this are convincing, they receive what they go after. People like this most often will take their rewards asking that they do not tell the one whose name they used and will go hide what they openly stole so that they will not find out because they are aware that what they did on their own accord will be disapproved of. Elisha asked the question “where have you been” much like GOD asked the question of Adam “where are you”. The question was not asked because GOD did not know where Adam was because GOD is everywhere, knows all things and sees all things, so HE knew the location of where Adam was. And Elisha knew by the Holy Spirit where Gehazi had gone. The question that was asked by GOD to Adam and by Elisha to Gehazi is so that they could see where they were. Out of obedience to disobedience, out of fellowship, off the straight path and on to the crooked, off of what was once smooth to now what is rocky. All because of Gehazi’s sin, he was struck down with leprosy that Naaman once had and lost fellowship with Elisha. People need to get this into their heads, “do not be deceived, GOD is not mocked, whatsoever mankind sows that is what mankind will reap” the world says it this way, “what goes around comes around”.

GOD’s mercy is not something that we can buy. GOD’s mercy has already been purchased for us in CHRIST JESUS and HIS death on that cross. Though JESUS had not yet come to earth and die in our place, the mercy of GOD still operated in mankind. So often people do not recognize the mercy of GOD and just as Gehazi missed it, so do people today. Those of us who go about doing good to and for people as we are being directed by the Holy Spirit should not do anything for profit if people desire to pay, ask them to give it to those who are in greater need. We obey the instructions and follow what the desire of JESUS is in the Holy Ghost. Freely we are receiving and freely we give out. We cannot lose sight of what the children of the living GOD must do when we have prayed for and received the baptism of the Holy Spirit and that is to follow what JESUS asked of us and do what HE said that we can do in the power of the Holy Ghost. Heal the sick, bring back those who have died, heal those with skin diseases, and drive out demons.

This is a fact and I hope that you will see this for yourself. Had Gehazi only changed his mind regarding being deceitful and lived as GOD intended, he would have not succumbed to the punishment that he received. But he would not allow GOD to change his heart. Had Judas Iscariot had only asked GOD to change his heart, he would have not succumbed to self-righteousness and committed suicide. Where are you, do you meditate on GOD ideas, your ideas, or the devil’s ideas. Change your mind/repent and ask GOD for forgiveness if you are a non-believer. If you are my sibling in CHRIST and you are still meditating on your ideas or the devil’s ideas acknowledge that and change your mind and begin meditating on GOD ideas. Notice how I left out “ask for forgiveness” because we have already accepted and received GOD’s forgiveness. To keep asking for forgiveness demonstrates that we do not have an understanding of the completeness of GOD’s forgiveness through HIS SON, JESUS. Those who are believers in CHRIST JESUS have a circumcised heart and after asking for the baptism of the Holy Spirit this gift will be poured into you. Never make people believe that we are super special just because we have the gift and outpouring of the Holy Spirit living within us and that we are the only ones who can do that which the Holy Spirit guides us to do. If we can do it, they can do it. Who are they? Anyone who has accepted, believed, and trusted in this fact, that JESUS is the CHRIST/MESSIAH, and that HE is the Savior of the world. So, who are we to deny the outpouring of the Holy Spirit to any believer that desires to have Him, so that they too may be endued with His power to learn of Him and to do well among the people? We are created in the image of GOD and HE desires that we love as we live among our siblings doing good not only for one another but to those who do not know HIM and who desperately need HIM. We must follow as we are being guided and led by the Holy Spirit. We will not profane the Holy Spirit by requesting or accepting money to do what He has directed us to do. Because when we do that we are standing in GOD’s way and instead of bringing people closer to GOD we are pushing them further away after all the emotionalism has died down and they begin to think about what it cost them to receive from GOD. JESUS already paid the full cost and has the receipt.

Keep in mind that the heart of mankind is deceitful and incurable. This is why we need a heart transplant because without CHRIST JESUS performing cardiovascular surgery in us we are doomed to die in all those secret hidden sinful motives that we have. Also, our new heart will cause us to break away from sins and we will exhibit true repentance/the changing of our mindset by doing what is right rather than continuing in the practice of doing wrong. We will no longer show the wickedness that once held us, prisoners and we will begin to be merciful and GOD will cause us to prosper in peace and healing. Do not allow what GOD is doing through us by HIS Holy Spirit to bring about within us pride. Remember pride got Lucifer/satan evicted out of heaven along with his followers those fallen angels/demons. Pride will cause you to not only fall from GOD’s grace but you will push others further away so that they will not get to experience the fullness of HIS grace. This will cause a root of resentment directed at GOD when GOD is not guilty but mankind is with his deception and greed, lying about what the Holy Spirit is not doing and what is required that has nothing to do with JESUS. This is defilement.